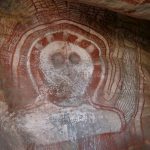 Our Elders, grandparents and great grandparents, in their younger years, lived traditional lives on their Graa. All the things they needed for their daily subsistence – such as food, utensils, tools, weapons, shelter, transport, medicines, music, art and their cultural and spiritual well-being – were mostly found in their Graa or they shared with neighbour Graa or exchanged (the Wunan system) with tribes outside of Wunambal Gaambera Country to places as far away as Walmajarri in the desert.

They wrote our Uunguu Plants and Animals Book (Karadada et al 2011) as their traditional knowledge legacy to us today and our future generations.

From our stories, some of the first outsiders to mix with our Wunambal Gaambera ancestors were Indonesian Makassan fishermen more than two centuries ago, coming each year in their perahus (traditional outrigger boats) during the monsoon season to collect trepang (beche-de-mer) from our reefs and set up camps on our coast to dry their catch before heading back on the south-east winds. Some things our people got from them were iron for implements and improved canoe design.

In the early 1900s, our parents and grandparents encountered Europeans on Country. Beachcombers, explorers, pearlers and an experimental peanut farmer set up camps for a time, the most notable at Kingana in lower Vansittart Bay. At some of these places our people traded dingo pelts and trepang for supplies, gained some work and new experiences.

With World War 2 looming, our people were relocated from their Graa to mission stations at Kalumburu and Kunmunya (and eventually Mowanjum at Derby). Mineral exploration activity in the period 1960-80 on the Mitchell Plateau has provided road and air access for Kandiwal families to live on their Graa.